Hazel Hawke – what an entrepreneurial mother! 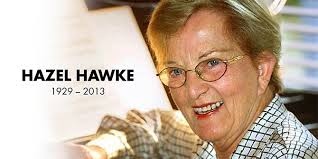 Having just watched the updated version of “Australian Story” following the death of Hazel Hawke, it brought home to me what a wonderful woman she was. I’d always held her in high esteem and tonight’s episode only confirmed that was no fluke. What a legend!

I can only hope that Daughter, family and friends speak as highly of me when my time comes.

Even in her final days, at her most vulnerable, she continued to share, to use the circumstances as a means of educating, of deepening, of love-in-action.

I have since heard her described as Australia’s Eleanor Roosevelt. Maybe this is right in some respects… but I want the rest of the world, myself included, to remember her as Australia’s Hazel Hawke. That’s more than enough.

Rest in Peace. You will be missed.

USA Today by Jim Collins (December 30, 2003)
Regardless of the age of this article, it is still a very timely piece…

Each time the New Year rolls around and I sit down to do my annual resolutions, I reflect back to a lesson taught me by a remarkable teacher. In my mid-20s, I took a course on creativity and innovation from Rochelle Myers and Michael Ray at the Stanford Graduate School of Business, and I kept in touch with them after I graduated.

One day, Rochelle pointed to my ferocious work pace and said, “I notice, Jim, that you are a rather undisciplined person.”

I was stunned and confused. After all, I was the type of person who carefully laid out my BHAGs (big hairy audacious goals), top three objectives and priority activities at the start of each New Year. I prided myself on the ability to work relentlessly toward those objectives, applying the energy I’d inherited from my prairie- stock grandmother.

“Your genetic energy level enables your lack of discipline,” Rochelle continued. “Instead of leading a disciplined life, you lead a busy life.”

She then gave me what I came to call the 20-10 assignment. It goes like this: Suppose you woke up tomorrow and received two phone calls. The first phone call tells you that you have inherited $20 million, no strings attached. The second tells you that you have an incurable and terminal disease, and you have no more than 10 years to live. What would you do differently, and, in particular, what would you stop doing?

The Highest Goal: The Secret that Sustains You in Every Moment…

by theEmother | Jan 7, 2011 | entrepreneurial mothers, MEinc, so you think you're in business

Entrepreneurship is a way of life, not a business concept; mothers take note!

…The very point of it all lay in a fundamental challenge issued to each of us: Make your life itself a creative work of art.

In the years since, I’ve come to believe that there are two approaches to life. The first, followed by most, is the “paint by numbers kit” approach to life. You do what other people say. You follow a well-traveled path. You stay within the lines. And you end up with a nice, pretty—and unimaginative—picture. The second, followed by few, is to start with a blank canvas and try to paint a masterpiece. It is a riskier path, a harder path, a path filled with ambiguity and creative choice. But it is the only way to make your life itself a creative work of art. To paint a masterpiece requires a concept, a place to begin, a guiding context in the absence of the comforting numbers and lines in the pre-made kit. That guiding frame of reference is the highest goal, and bringing it into your life with the help of Michael’s discoveries is what this book is all about…
read on

Which approach drives the way you live your life?

People Come into Your Life for a Reason, a Season or a Lifetime…

An oldie but a goodie, especially given the time of year…

When you know which one it is, you will know what to do for that Person..

When someone is in your life for a REASON, it is usually to meet a need you have expressed. They have come to assist you through a difficulty, to provide you with Guidance and support; to aid you physically, emotionally or spiritually.

They may seem like a godsend and they are.
They are there for the reason you need them to be.

Then, without any wrongdoing on your part or at an inconvenient time,
this person will say or do something to bring the relationship to an End.

What we must realize is that our need has been met, our desire
Fulfilled, their work is done. The prayer you sent up has been answered and now it is time to move on.

Some people come into your life for a SEASON, because your turn has come to share, grow or learn.

They bring you an experience of peace or make you laugh.
They may teach you something you have never done.
They usually give you an unbelievable amount of joy.

Believe it, it is real. But only for a season.

LIFETIME relationships teach you lifetime lessons,
things you must build upon in order to have a solid emotional
Foundation..

Your job is to accept the lesson, Love the person and put what you have learned to use in all other Relationships and areas of your life.

It is said that love is blind but friendship is clairvoyant.

Thank you for being a part of my entrepreneurial mother life,
regardless whether you were a reason, a season or a lifetime.

By Avivah Wittenberg-Cox for ChangeThis.com

Most companies would like to become more gender balanced at all levels, with women and men dancing together in a smooth and natural way. They have been trying for decades to attract, retain and promote more women. They have tried to grow their female customer bases. They are embarrassed by the all-male faces on the boardroom website, dancing to the tune of their own drummers. Most have gotten rid of the photos, but not the problem. Yet some companies have tried really hard, for a really long time. And almost everyone, male and female, is suffering from gender fatigue.

Why so much effort for so little result?

Because we have over-focused on kissing Cinderella awake from her slumber and inviting her to the ball. But nobody ever bothered checking if the prince can actually dance…
read on